This is the documentation for ConfiForms Server/Data Center app

Quite often there is a need to create a form that gathers anonymous feedback.

By default ConfiForms tracks a user who has created the record in a form and also set's her as a record owner. This is a default behaviour for ConfiForms forms when used on pages which do not allow anonymous access. When anonymous access is an option you can configure your form on such page and enable anonymous records from not-authenticated users, but when a an authenticated user access the form and creates a record her username will be tracked.

Since version 1.9.20 of ConfiForms we have added an additional setting which allows to gather feedback (create records in the form) completely anonymously.

There is a new feature/setting available on ConfiForms Form macro called "Anonymous form". And all the records will be created without tracking the createdBy and ownedBy metadata, 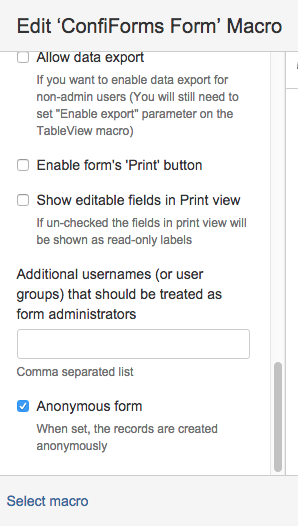